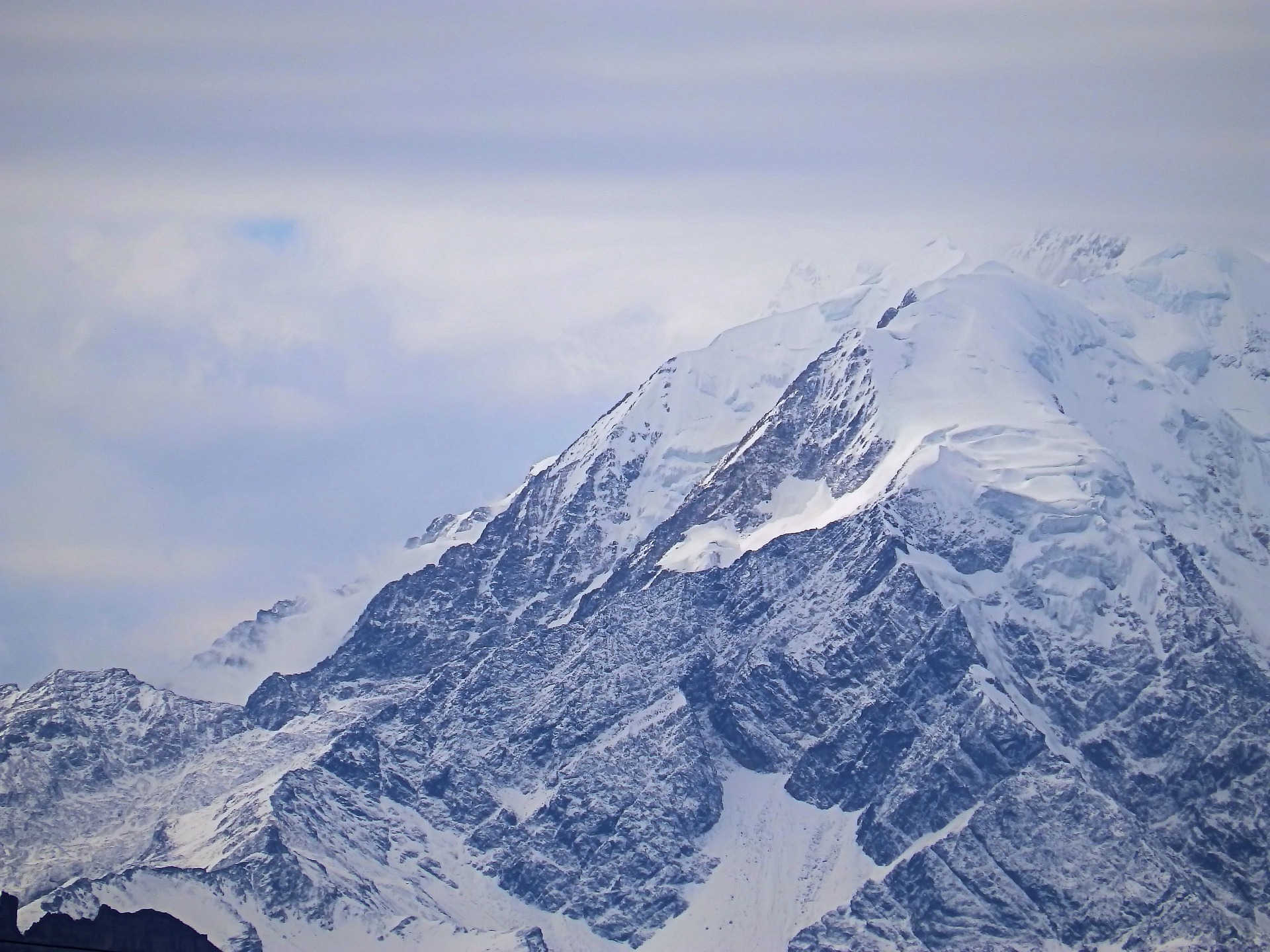 The retreat of sea ice and glaciers, sea-level rise, and extreme climate events are predicted to cause immense economic and social chaos. Around 10% of the world’s population lives in coastal areas that are less than 10 meters above sea level. Furthermore, farming requires the availability of sufficient fresh water, the largest source of which are rivers, which are largely fed by rain and mountain glaciers in the melt season. Therefore, monitoring mountain glacier extents is inevitable in the era of global warming.

A Geographic Information System (GIS) is a computer-based tool for storing, managing, analyzing, and visualizing many different types of data. GIS technology allows for deeper insights into data and supports decision-making in various fields. Geo-information is largely based on raster and numerical data collected from satellite sensors and plays a critical role in environmental data science. Satellite image processing is an important tool for any environmental scientist to research the climate and to support their research based on in-situ data. GIS also plays a key role in the evaluation of public policies, programmes, and projects related to natural resource management and other fields whenever datasets are georeferenced (include at least latitudes and longitudes of each observation).

In this study, we have analysed satellite images of the Bolivian mountain range of Cordillera Quimsa Cruz (Figure 1) to determine the glaciers’ extent of retreat. Such retreats can be measured through temporal analysis of multispectral satellite images. The spectrum-based supervised classification allowed us to distinguish snow-covered surfaces from other surface types and helped us to create a temporal glacier inventory. This post shows the step-by-step procedures to reproduce and monitor glacier changes anywhere. This aims at helping anyone interested in contributing to the evaluation of the impacts of global warming and hopefully motivate actions in terms of national and international policies, programmes, and projects.

According to Oxfam, Bolivia is particularly vulnerable to the impacts of climate change for six main reasons:

The map below shows Bolivia and the area which has been analysed here. We analysed glacier retreat in a time span of 30 years from 1985 to 2015 for the month of August with 10-year intervals. We observed one individual glacier, which showed a reduction of ice extent by 40.47% from 1985 to 2015. This indicates that global-warming consequences in Bolivia will affect the ecosystems and lives of its people, particularly those ill-equipped to adapt to the present and future impacts. Cities such as La Paz and El Alto are vulnerable to the accelerated retreat of glaciers, which are the sources of a significant amount of their drinking water (Oxfam 2009). In addition, thousands of poor Andean farmers are dependent on glacial melt for parts of their water supply to irrigate their crops. Glacier retreat can also impact in terms of unpredictability of the rainfall, more extreme weather events, and higher temperatures, with negative impacts for livelihoods and the ecosystems. 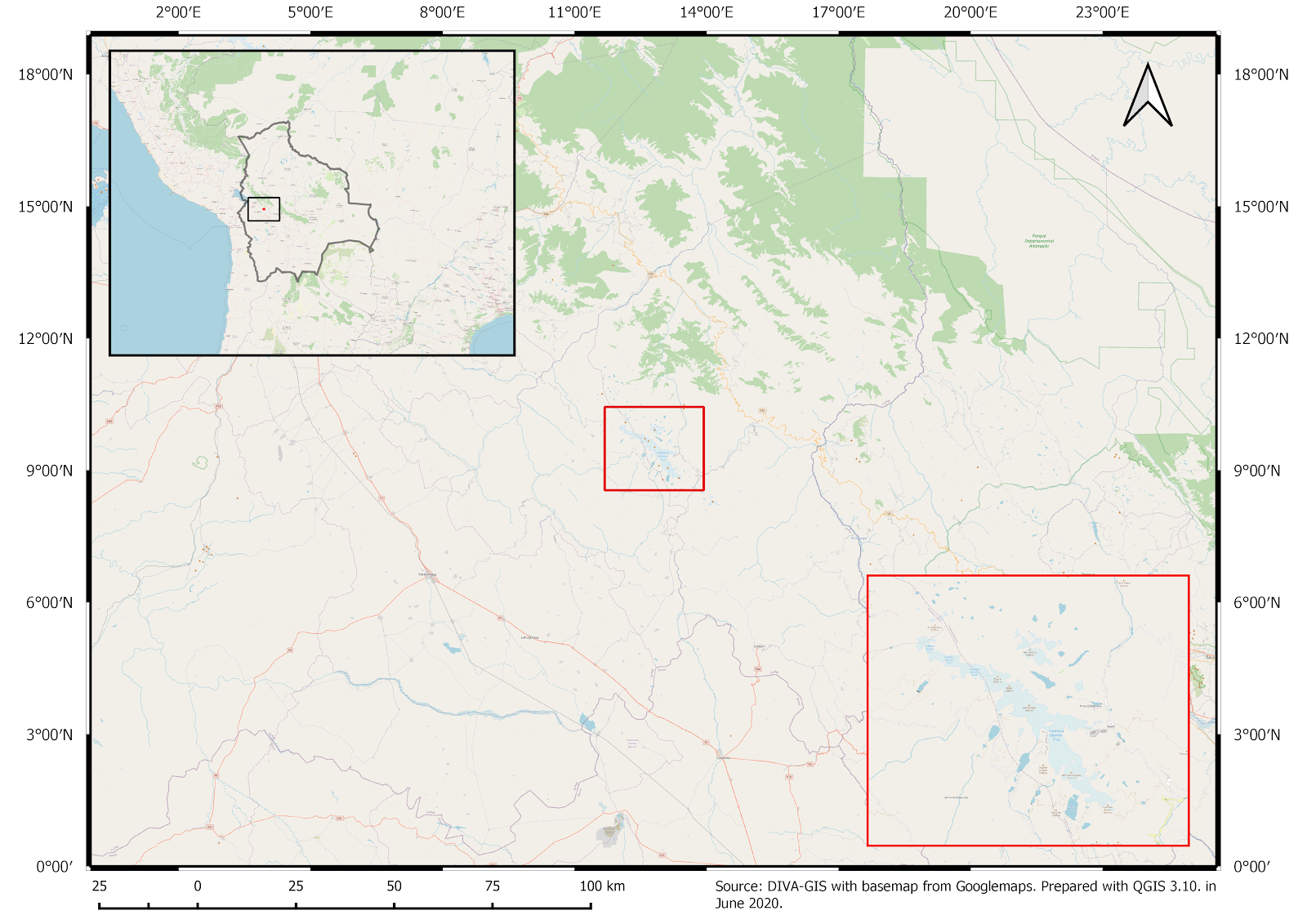 For creating this glacier inventory, that is, attribute tables, we used multispectral satellite images and a Digital Elevation Model (DEM). The attribute tables included latitude, longitude, area, and elevation for each polygon representing one specific glacier. In this study, images are used from satellites Landsat 05 and Landsat 08. The temporal interval is 10 years in the time span of 1985 to 2015. In case of the glacier retreat study, the end of the ablation period is important (in this study: August).

Images had to be selected that showed no visible cloud cover over the region of interest (ROI), with shadows as small as possible. The satellite images (Level 1 – Geo TIFF) and the DEM (ASTER GLOBAL DEM tiles) can be downloaded from the website of the U.S. Geological Survey.

We created a project file in QGIS, loaded the desired bands (SWIR, NIR, and Red) of one of the downloaded satellite images taken on 5 August 1985, and created a false-colour image using the Build virtual raster tool. 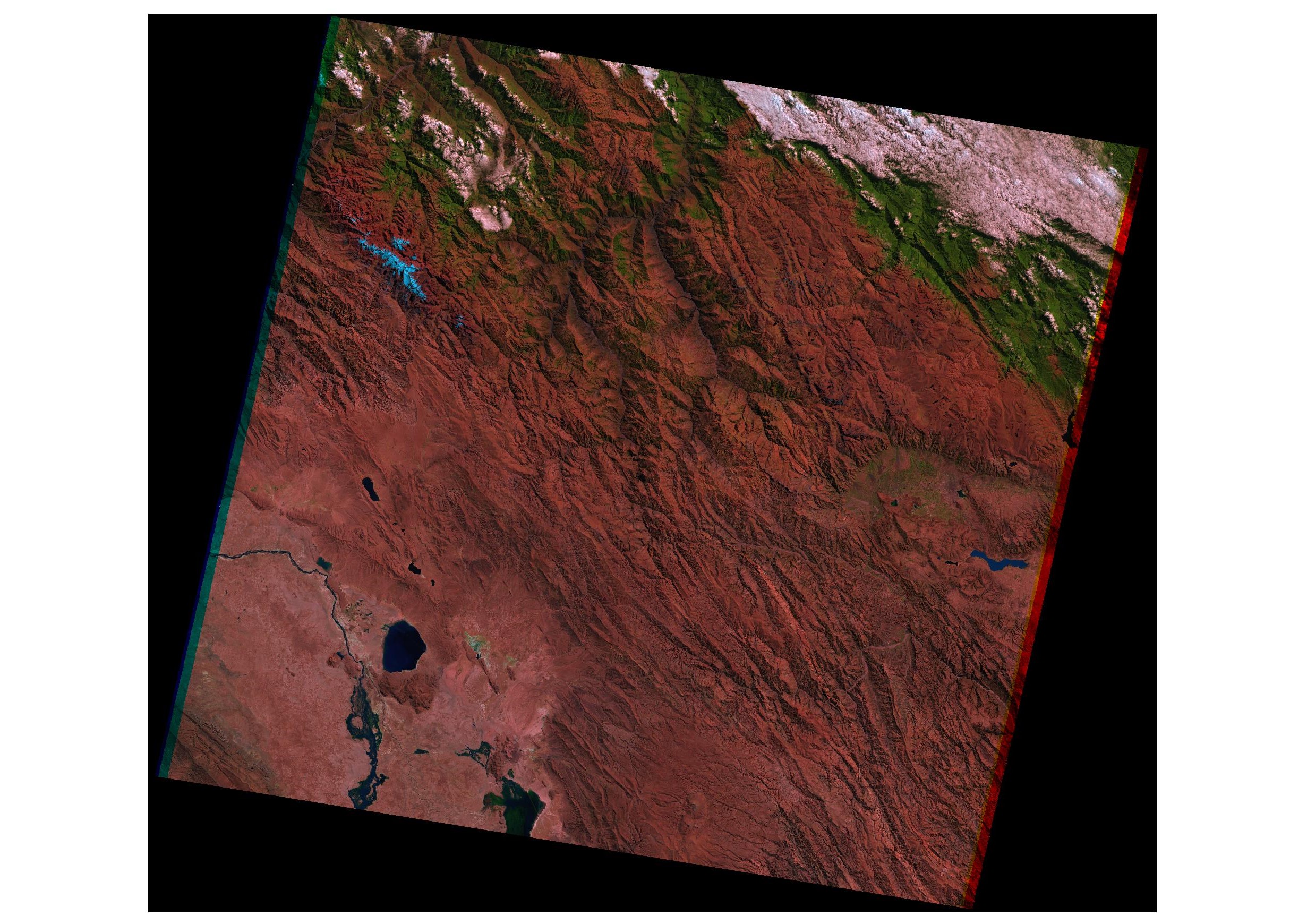 Figure 3: Our ROI is the mountain range of Cordillera Quimsa Cruz and needs to be clipped out of the downloaded satellite images for better visualization. 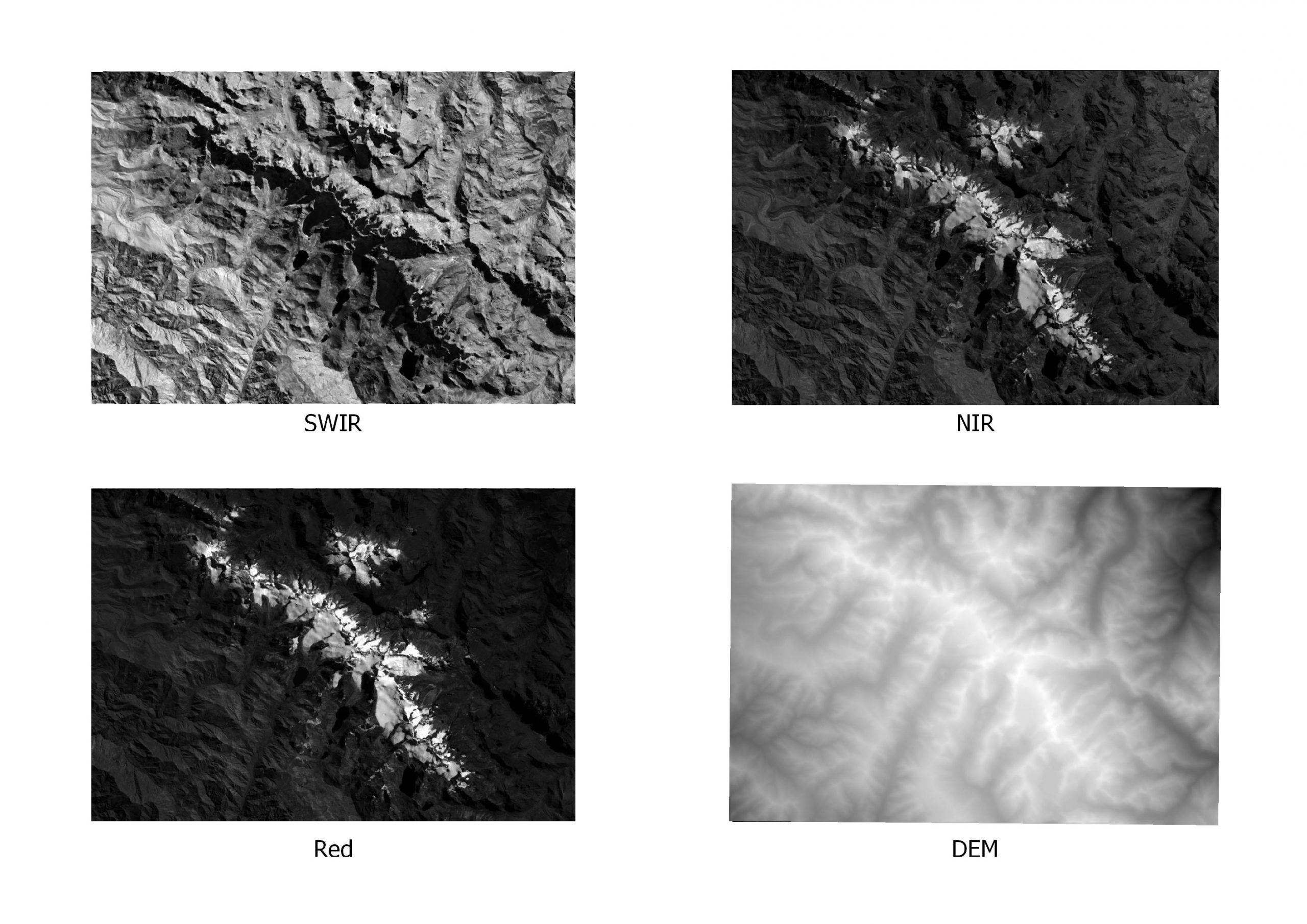 A sharp reflectance of Red colour by a snow-covered surface as contrary to SWIR can be used to classify snow surfaces from other surface types. A band ratio image is one of the methods, such as Red by SWIR, NIR by SWIR, and Normalized Difference Snow Index (NDSI). In this study, a simple band ratio Red by SWIR is used. The band ratio image can be created using the Raster Calculator tool. 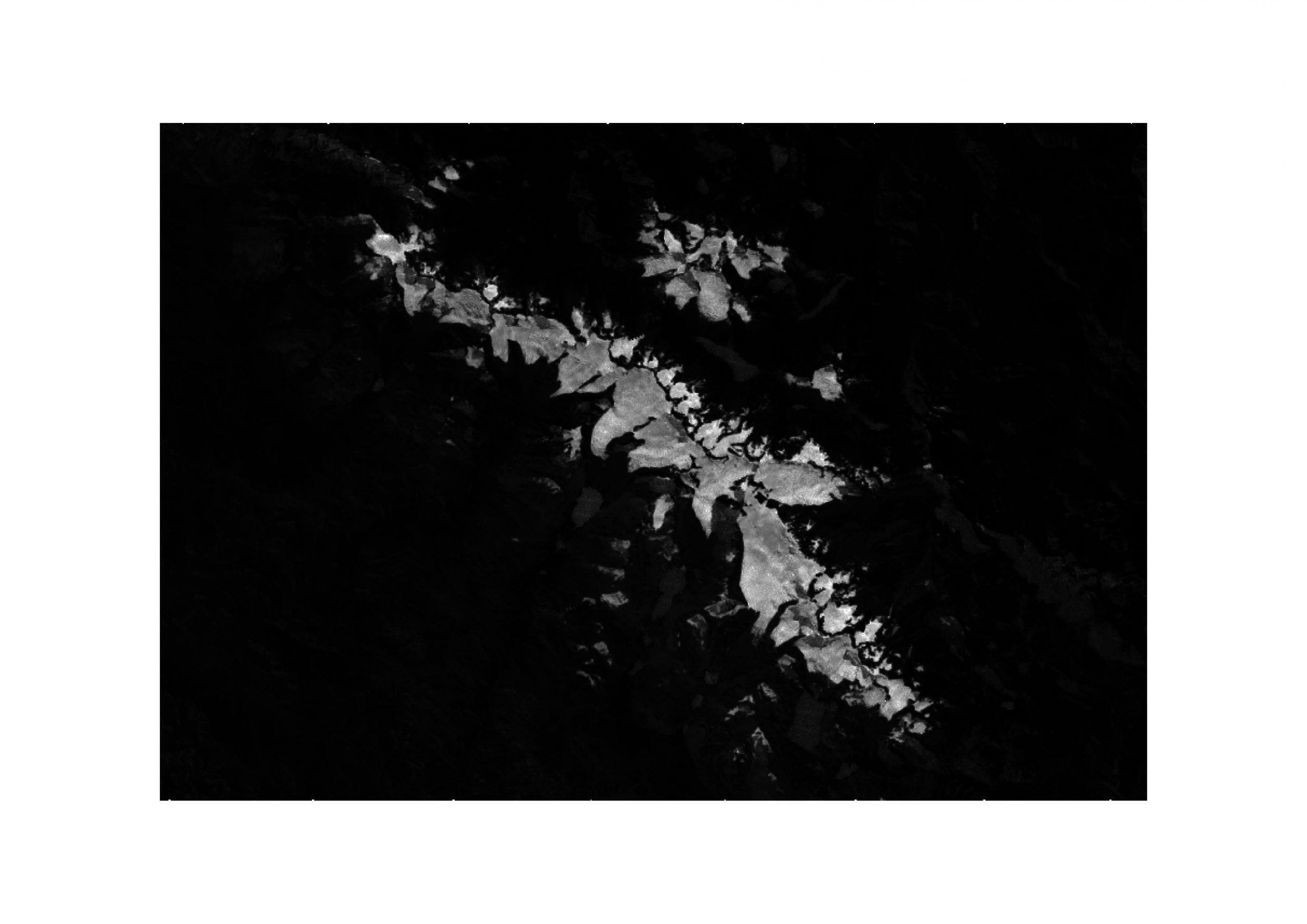 The THV can be determined by using the Identify Features tool located at the Attributes toolbar, zooming in somewhere to the edge of the glacier extent and clicking on the least visible pixel that can be identified as snow. A simultaneous look over the ratio image and false-colour image together with a google base map as shown in the figure below helped to identify the least possible THV. 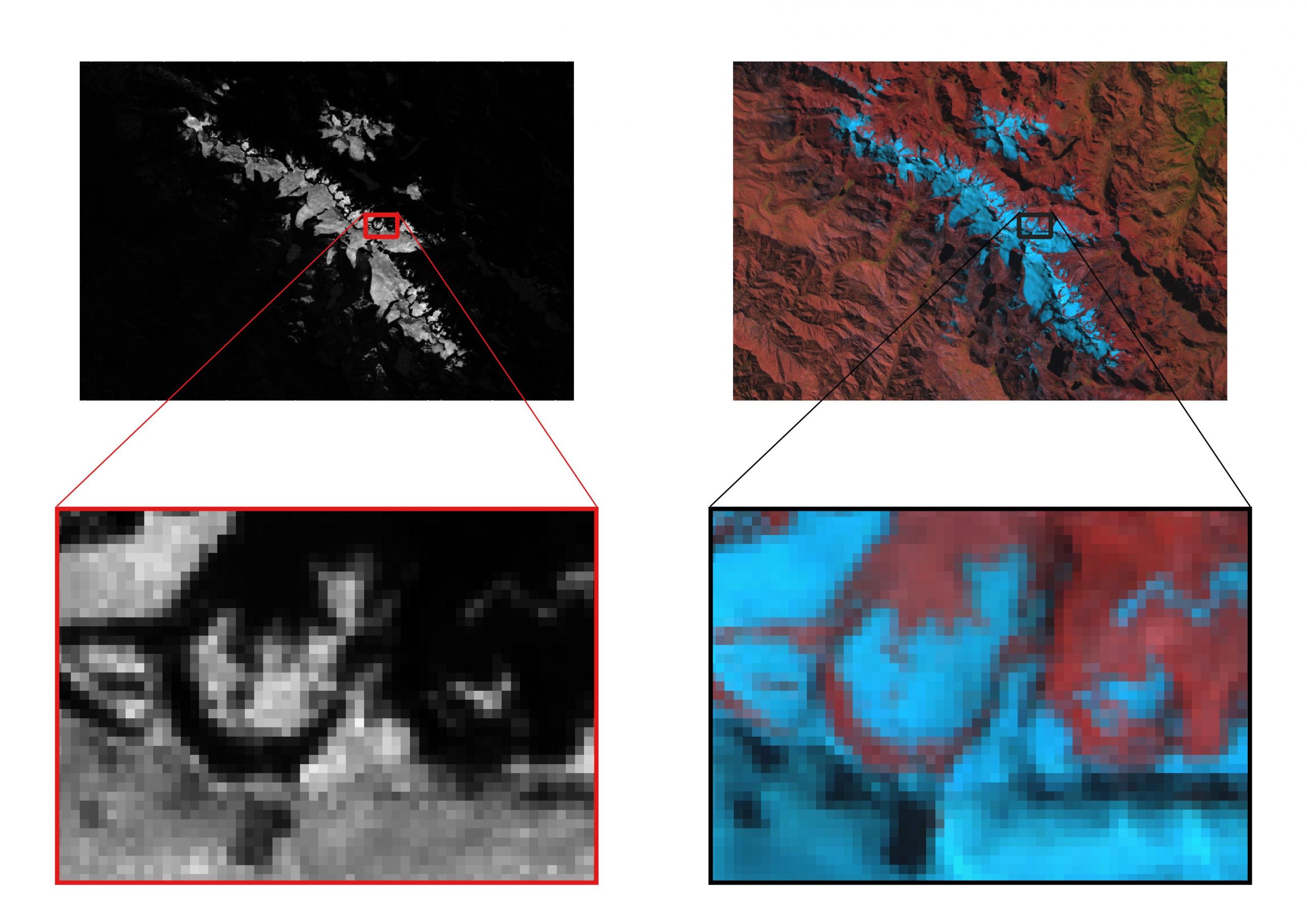 Figure 6: Zoomed section of the ratio image (3 by 5) focusing on an edge of the glacier with a simultaneous view of the false-colour image.

The lowest THV was selected from the ratio image (i.e., 2.2), allowing us to assume that all pixels >2.2 were classified as snow.

Creating a reclassified image based on THV 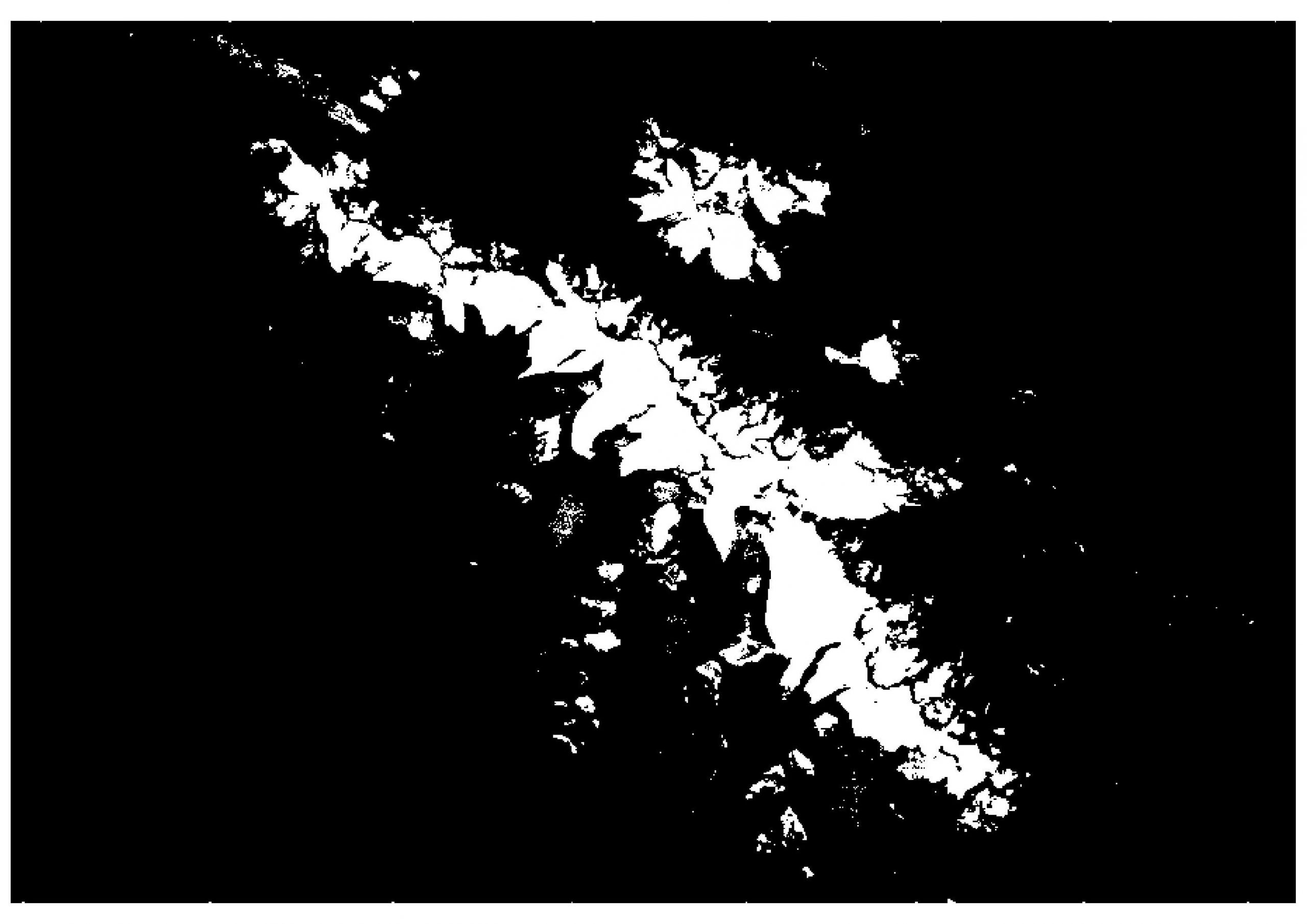 Converting to vector layer and separating the catchment areas

We converted the reclassified image (Figure 7) to a vector image using the Polygonize tool and, afterwards, Digitizing tools to clean the small polygons far from mountain ridges representing leftover snow in catchment areas. We were required to fill the gap areas among glaciers (that were not classified as snow due to shadow cover) and merge those small polygons that were aligned with relatively bigger polygons. 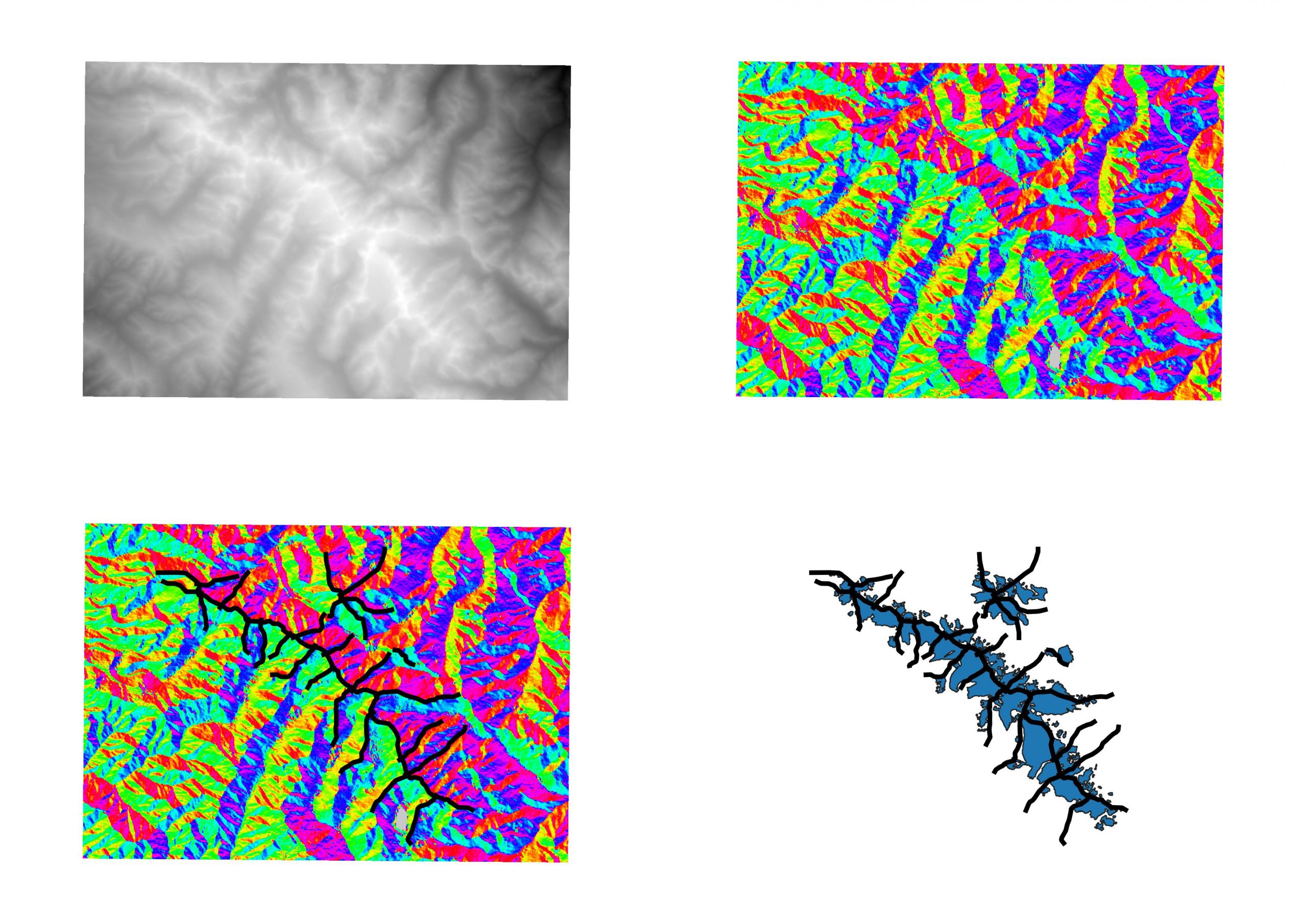 We needed to fix the polygons’ geometry using the Fix geometries tool before we divided glaciers (polygons) based on their location relative to mountain ridges. We could then draw boundary lines (a new vector layer) over mountain ridges with the help of the DEM (using Aspect) in order to divide the glacier regions.

Figure 9: Aspect (top-right) created from DEM (top-left). Boundary lines drawn at mountain edges with the help of Aspect (bottom-right) can be used to split glaciers (bottom-left).

The attribute table contains important information such as latitude, longitude, elevation, and area size. We extracted elevation information of polygons from DEM using the Zonal statistics tool. We calculated the area of the polygons using the Field calculator tool and fixed the geometry using the Fixed geometry tool. For information on the coordinates, we created a centroids layer using the Centroids tool to get centralized coordinate values of the glacier polygons by using the Field calculator tool, and joined the attribute table of Centroids layer to the vector layer by using the Joins feature in vector layer properties. 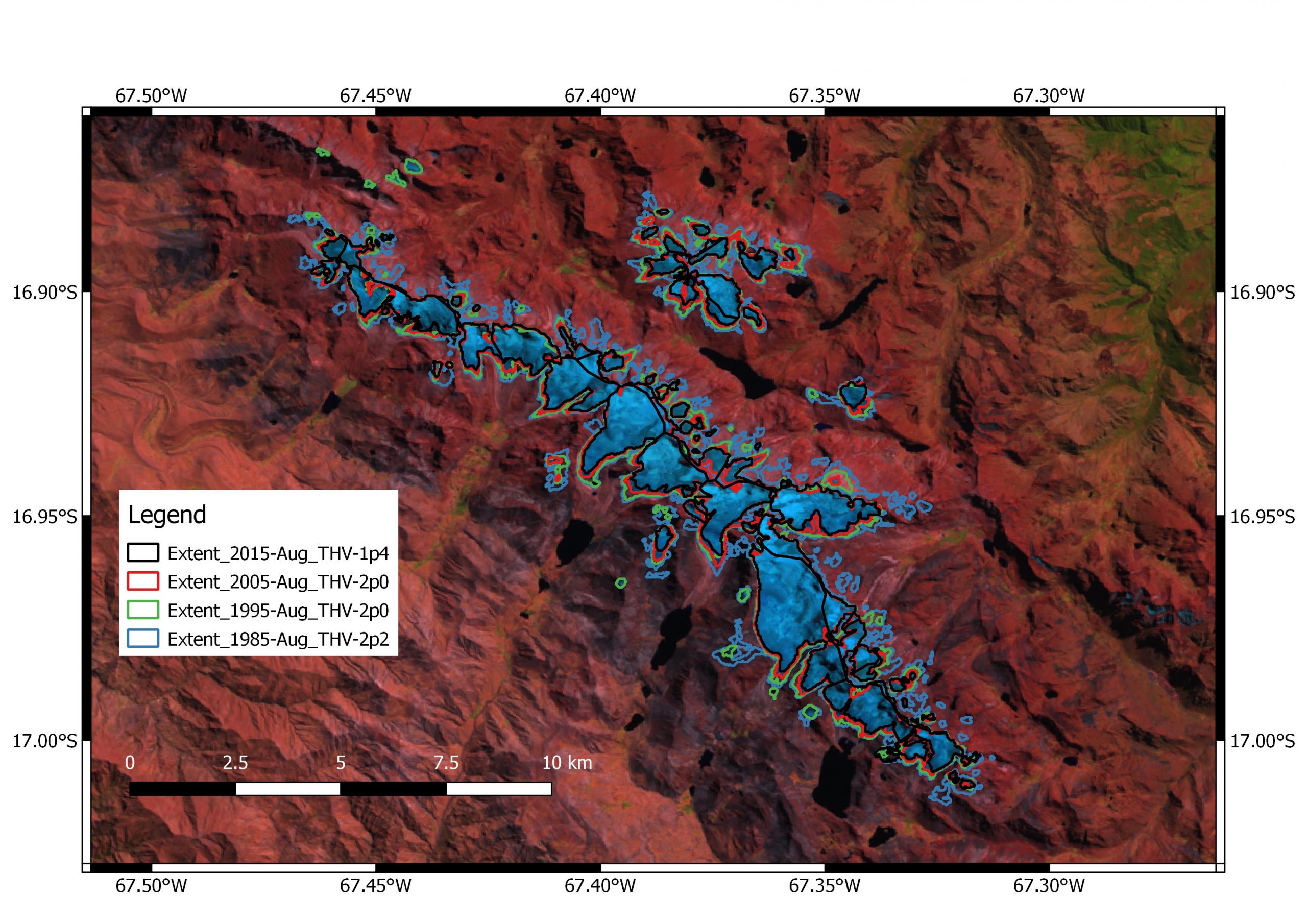 The above procedure was repeated with other temporal images, using the same layer extent of ROI and boundary lines layer of 1985 throughout the process. The layout shows the retreating glaciers’ extent. The anomaly for a sub-divided glacier was calculated by using the attribute table below. 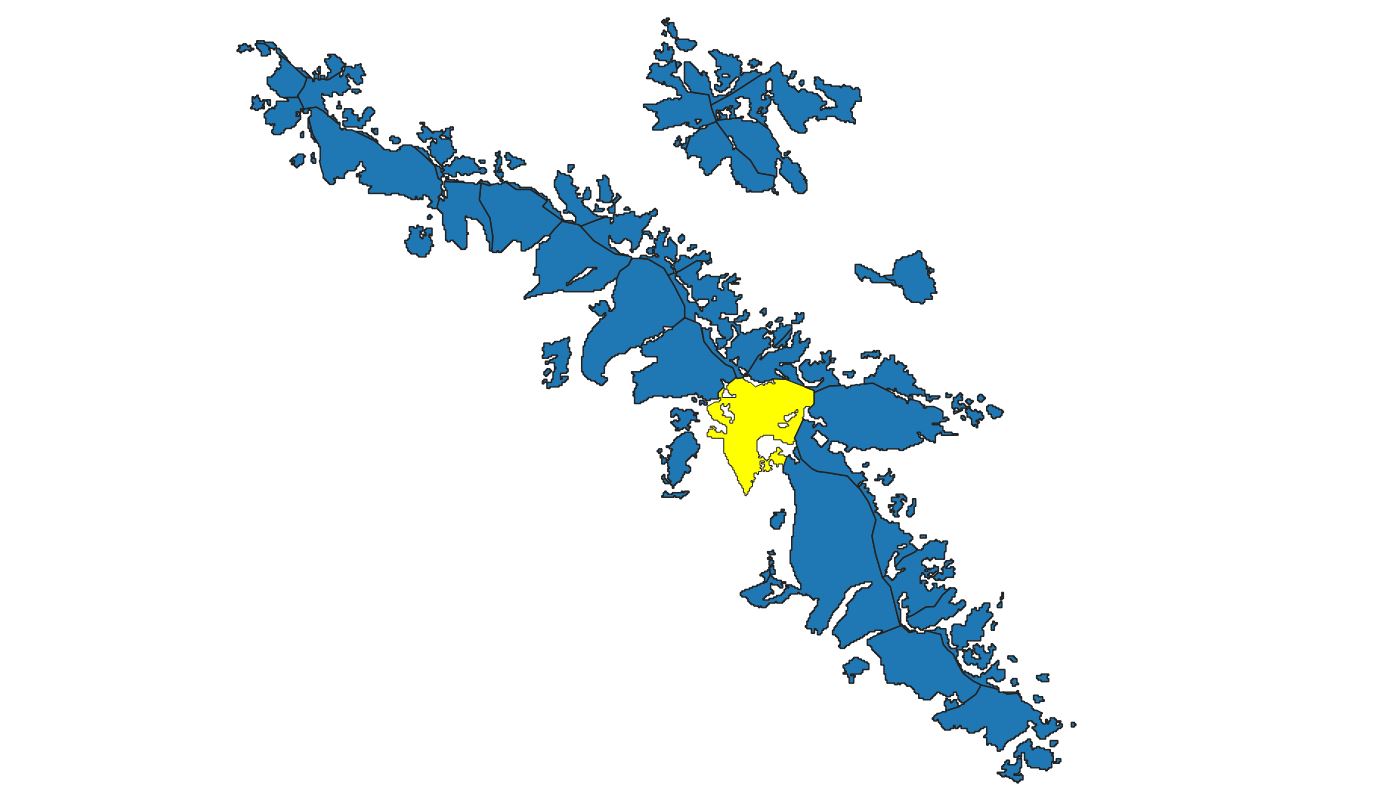 Table 1: Attribute table of the selected glacier in Figure 12.

The consolidated map was created using all the end-result glacier extent layers of the years 1985, 1995, 2005, and 2015 using the New Print Layout tool located at the Project toolbar.

Bolivia is particularly vulnerable to the impacts of climate change and is home to about twenty percent of the world’s tropical glaciers, which are retreating more quickly than predicted by many experts. This post shows the step-by-step procedures to reproduce and monitor glacier changes anywhere. This aims at helping anyone interested in contributing to the evaluation of the impacts of global warming and hopefully motivate actions in terms of national and international policies, programs and projects.

Using QGIS (version 3.10), we analyzed glacier retreat in a time span of 30 years from 1985 to 2015 for the month of August with 10-year intervals. The consolidated map shows a clear detectable temporal retreat of the extent of glaciers throughout the mountain range. The retreat is more prominent at eastern glaciers of the mountain range. We observed that one individual glacier, the glacier in Figure 12, has reduced its ice extent by 40.47% from 1985 to 2015. We can also see in the consolidated map that the overall glaciers’ extents are undergoing temporal retreat even though a lower THV is used for later years. The THV used were 2.2, 2.0, 2.0, and 1.4 for the years 1985, 1995, 2005, and 2015, respectively. This indicates that global warming consequences in Bolivia will affect the ecosystems and lives of its people, particularly those ill equipped to adapt to the present and future impacts. Cities such as La Paz and El Alto are vulnerable to the accelerated retreat of glaciers, which are the sources of a significant amount of their drinking water. In addition, thousands of poor Andean farmers are dependent on glacial melt for part of their water supply to irrigate their crops. Glacier retreat can also impact in terms of unpredictability of the rainfall, more extreme weather events and higher temperatures, with negative impacts for livelihoods and the ecosystems.

In the future, a similar study could be applied to Himalayan glaciers (up to 2000m above sea level) in southeast Asia, which provide water to five river basins of the Indus, Ganges, Yellow, Brahmaputra, and Yangtze rivers for 1.4 billion people (over 20% of the global population).

We would like to express our gratitude to Annalena Oeffner Ferreira and Valerie Kateb in reviewing and providing suggestions for this post. Many thanks to Dr. Marco Möller (University of Bremen) for supervising the project which made this post possible.